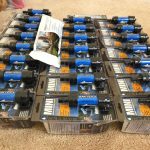 I think, there are several reasons why our little, private initiative, helping in Puerto Rico, was so successful: